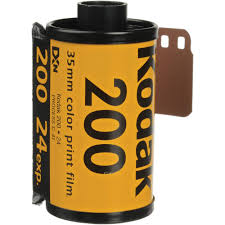 While on the phone with Apple Support yesterday, I went through my photo library trying to clean up the duplicates, blurry shots and long movie clips I accidentally took when I thought I was taking a photo.

I thought back to the point and shoot days when we had rolls of film with 24 photos. Only 24 opportunities to take a great shot.

On the other hand, we also had 24 chances to put our finger over the lens or forget to use a flash. The film had to be loaded correctly as to not expose it, and after the 24 pictures were taken, the film was placed in a little cylinder and dropped off at the photo store.

Film development used to take a few days and sometimes even a week until you saw your 24 treasures. When you got the call letting you know they were ready (this is when we actually picked up the phone to see who was calling) you took your perforated return ticket ripped off from the film envelope, picked up your pictures, sorted, tossed and placed the good ones in an album or shoebox to save.

Then times changed. Without even asking.

This is the typical photo protocol:

Maybe there are some people with great systems for sorting and organizing, but it’s not me…yet.

I have FODP – Fear of Deleting Photos.

When I’m clicking through the pictures of my kids when they were young, I’m transported right back to that point and time. Like the moment our kids all jumped in the pool for the first time together and couldn’t stop giggling with pride. Or the moment Zavier was covered with red Georgia clay after stealing a base, then found my eyes and waved, click!

After a long phone call, the Apple support guy seemed to wish we were back in the point and shoot days also. Yes, the magic number 24 seems to make sense now. It’s simple, once you take your 24 pictures, it’s time to set the camera down and enjoy the moment. I’m going to give it a try.

One thought on “Are 24 photos enough?”

Lifesfinewhine
The Art of Blogging