As the world continues to keep a six-foot distance from one another, the commemoration of the Last Supper of Jesus Christ, Holy Thursday’s Mass, was streamed online this year.

As I stared up at a copy of the famous artwork by Leonardo Da Vinci given to me by my grandmother, I noticed the lack of personal space between the apostles. Honestly, why didn’t anyone sit on the other side of the table? But in all seriousness, this masterpiece depicts the moments after Christ let his chummy crew KNOW-HE-KNEW that one disciple would betray him before sunrise.

We all find ourselves in that space sometimes. That skeptical time when our trust in ourselves and others circle the drain and our own Judas or Coronavirus creeps into our world. But Jesus didn’t lose hope, and we shouldn’t either.

Keep your faith strong and know we’ll get through this time. Pray for the souls lost and do your part to not let the spread continue.  And for goodness sake tell all the Judas’ in the world to scoot over because they are sitting WAY to close.

In my research of the painting, I found a few rare facts about this stellar painting on leonardodavinci.net to share: 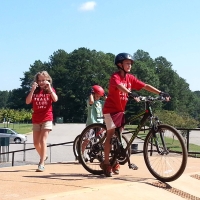 Lifesfinewhine
The Art of Blogging

Where fitness and fun come together for kids!