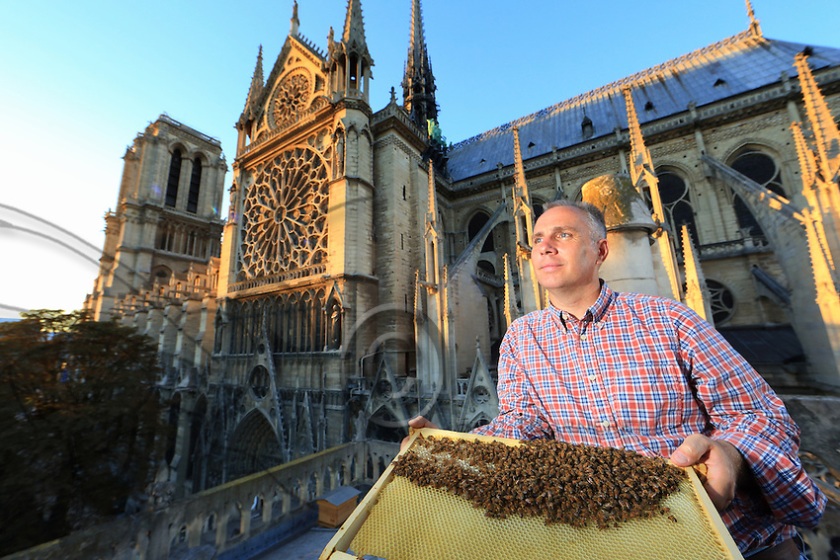 Today, as I practiced my reading for Holy Saturday Mass, I tried to find small links or connections as one does when they are responsible for delivering the longest reading of a nearly two-hour mass.

It notably starts, “In the beginning, when God created the heavens and the earth…”. With each line, Genesis serves as a luminary to guide us to the core truths of God. Basically, it lays out the plan of the week. The implementation of each day is impeccable and it’s my job to express it eloquently and “really fast” according to my kids.

While reading, I scooted past the first few days, glanced up at the ceiling and noticed a watermark from a leak. (I’m very distractable) Gee Whiz. So before I got to the 6th day, I investigated, called a plumber, was told: “not to cut the ceiling”. Fine. Read the news and eventually returned to Genesis.

As I perused articles about the iconic Notre Dame, and the tragedy of the fire, I stumbled across a gem of a story. Notre Dame beekeeper waits to learn fate of his 18,000 bees. It turns out that Notre Dame’s roof became home to a hive of bees in 2013. The hive was offered by Nicolas Geant, a beekeeper who already has many hives on rooftops in Paris. At one time the bee’s wax was used to make the candles for the church!

According to the cathedral’s website, St. Ambrose (340-397), bishop of the city of Milan, is the patron saint of beekeepers. The hive was placed as part of a larger effort to protect biodiversity and prevent bee die-off.

Enter Genesis 1 and another connection!

Then God said:
“Let us make man in our image, after our likeness.
Let them have dominion over the fish of the sea,
the birds of the air, and the cattle,
and over all the wild animals
and all the creatures that crawl on the ground.”

Notre Dame is not lost, it is a surviving edifice of crusades, reformations, and war. Her stones are intact, her people strong, and even the creatures that fly, crawl or swim have hope the spire will rise again.

Time to practice the reading and stop worrying about the leak. Perspective, right?